The History of Lakewood

Imagine the talent that has played at Lakewood Golf Club. Eight World Golf Hall of Famers won at Lakewood from 1963-1988 when it hosted the PGA tour. These eight golfers* won a total of 263 PGA Tour Victories, of this total 53 were Major Championships -the Masters, U.S. Open, British Open and PGA.

Billy Casper won at Lakewood in 1975

Few courses in the world have hosted such great players.

For many years, the men's and women's golf teams from Tulane University used Lakewood as their home course. 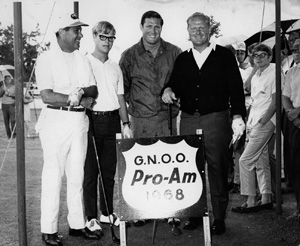 Jack Nicklaus won at Lakewood in 1973

Lakewood Country Club opened in 1961. It was designed by architect Robert Bruce Harris, foremost designer of the "Garden School" of architecture. The golf course was built by Maddox and Sons of Chicago, then the largest golf course contractors in Louisiana. The Lakewood club house and out buildings were designed by Edward Silverstein, one of the architects of the Louisiana Superdome.

Lakewood Country Club was on the verge of bankruptcy when the Firemen's Pension Fund purchased the property in May, 2003 for $6 million. The private club was closed and the facility was opened to the public. It was renamed Lakewood Golf Club.

*World Golf Hall of Famers who won at Lakewood. These eight golfers won a total of 263 PGA Tour Victories, of this total 53 were Major Championships -the Masters, U.S. Open, British Open and PGA.

Lakewood Golf Club is a New Orleans icon. Golf's greatest champions have won at Lakewood and the club house was the site of hundreds of wedding receptions, family gatherings and events over the years. Do you have memories of Lakewood you would like to share? Send them to us - photos or just fond memories. We're collecting them for our own scrapbook and Facebook fan page.